Microsoft’s Kinect is a versatile multimedia input device that can be used as a 3D scanner. Originally it was launched as an extension to its Xbox game console. We describe how to connect a Kinect to your Windows PC.

The Kinect happened to be a versatile device that, connected to your Windows computer, offers an array of new functions. The most striking one is 3D scanning in a user friendly way. That is very interesting for a device with a second hand street price of USD 25!

The plethora of new functions requires a lot of exploring and experimenting which can start as soon as your Kinect has been connected to your Windows computer. And that, surprisingly, is sometimes a frustrating exercise. We will try to help you out.

AFAIK there are four types of Kinect now:

So be sure, you know which Kinect edition you are using.

If you do not have one yet, we recommend the Kinect for Xbox 360 for the moment. It is cheap, the software runs on Windows 7 and you will find many free resources on the internet.

Your Kinect needs the right cable and enough power to operate.

When you tried already to install Kinect drivers and/or applications without success, it is wise to un-install them before you proceed.

So, go to the configuration panel in Windows and select “Add / remove programs”. Uninstall anything that starts with the word “Kinect”. Have a fresh restart of your system afterwards.

Installing the Kinect driver became a mess in our case. However, by trial and error, we found a way out.

Afterwards you will find the Kinect Studio program and a Developer Toolkit Browser plus some documents in your Windows task menu.

Now, first Power On your Kinect and then connect it to your computer via a USB-port.

Wait for at least five minutes. In the meantime you could look at Device management on your Windows machine to see what is happening. After a while, you will receive a Device Ready message.

In the Device manager you will see that four new devices have been installed:

Now start the Developer Toolkit Browser for exploring a bunch of ready-to-run demo’s and corresponding documentation.

One of the applications is Kinect Studio that supports other programs in working with the Kinect. 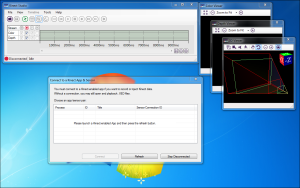 To conclude, a table with a summary of the options.